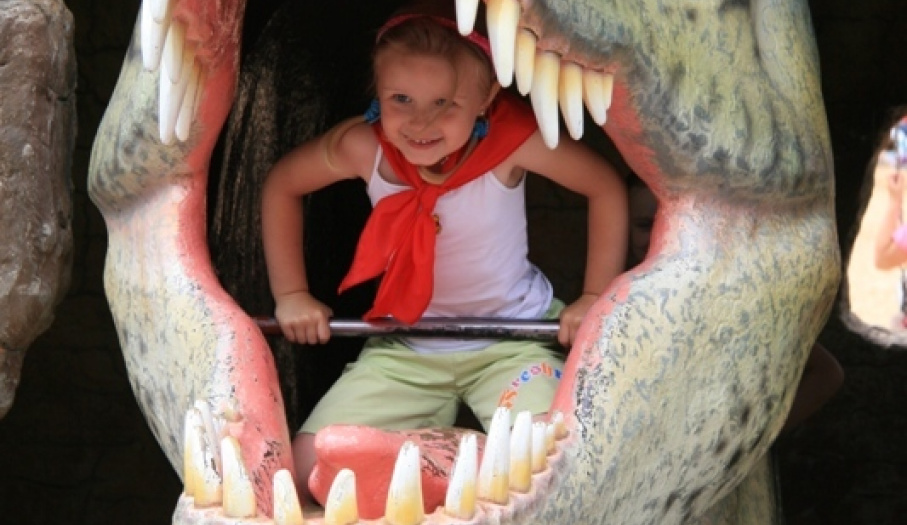 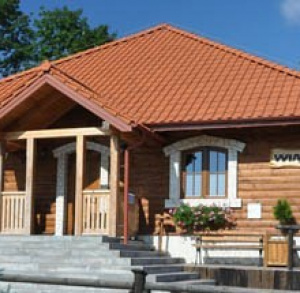 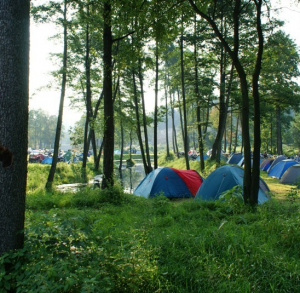 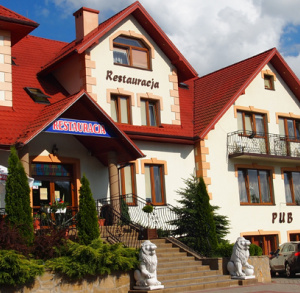 Kamienna running through  the Bałtów Plateau. Millions years ago dinosaurs roamed through the Kamienna River valley and left there their well-visible trail on the lime bedrock. The JuraPark Bałtów was set up nearby and it attracts lots of tourists every year. Touring the park is like traveling throughout our planet"s history from the Cambrian period till the present times. Reconstructed dinosaurs and other animal groups are the greatest attraction of the park. Thanks to the boards with descriptions of individual animals and geological epochs, the tour of the park becomes an interesting lesson of geology and natural history of the Earth. The trails of dinosaurs from the Świętokrzyskie Mountains, bone fragments and teeth of dinosaurs from Morocco as well as remains of other extinct animals once living on pour planet can be seen in the Jurassic Museum displaying over 300 petrifacts from Poland and the world.
----------------------------------------
Bałtów 150 million years ago
During the Jurassic period the area of Bałtów was covered by a warm sea, home to anthozoans, brachiopods, bivalves, snails, echinoids, and ammonites. Fossils discovered in Wólka Bałtowska let scientists suppose that there was a land not far away with the shoreline similar to that of the present-day Florida. Dinosaurs walked along the white carbonate beaches leaving behind them prints of their big paws. White rock outcrops visible around and in the village of Bałtów are remains of the former sea body. They contain many fossils, mainly of stenothermal anthozoans.
------------------------------------------
Studying the fauna of the former geological periods, we eventually reach the present-day equestrian center Kraina koni and the Zwierzyniec Bałtowski animal park, where on the area of nearly 100 acres a wildlife habitat was created. Touring the park in a specially adapted school-bus visitors can safely observe such wild animals as Dybowski"s deer, graceful fallow deer, curious mouflons, dignified herd of Scottish cattle, various subspecies of chamois as well as sheep, donkeys, tarpans (Polish horses), alpacas, and llamas.
The Zwierzyniec Bałtowski animal park borders directly on the Bałtowska Pętla hiking trail, biking trails and professionally maintained skiing slopes suitable even for experienced skiers.
Rafting down the Kamienna River on rafts managed by the locals in folk costumes is another attraction of the stay in Bałtów. This 4-km-long trip begins at the foot of the hill topped with the Drucki-Lubecki palace and ends at the Przy Młynie landing place.
Built in the 19th century, the Stary Młyn (Old Mill) is powered by water and still functioning. All elements of the mill equipment are in perfect operational state. An old miller who knows all secrets of the facility takes visitors around.

The neoclassical palace (119th c.) of the Drucki-Lubecki family is surrounded by a park arranged in the 18th century and containing many old trees recognized as nature monuments. Prince Aleksander Drucki-Lubecki lived in the palace before WWII. The whole family had to leave the property when the Red Army troops entered Poland. The estate was nationalized. Since then the palace has been devastated and cannot be toured.  The Church of Our Lady of Sorrows from 1697 is another noteworthy historical monument in Bałtów. The present church was erected on the foundations of the first wooden temple from the 11th century, which was consumed by flames. Totally remodeled in the early 20th century, the Church of Our Lady of Sorrows acquired quite a new layout. A big door was made in place of the former high alter, while in place of the former entrance a new presbytery with high alter were constructed  as well as two sacristies and two chapels. Two new towers, each of 36.5 meter-high, were erected. Of the original church only side alters, baptismal font and a Baroque pulpit were preserved.
In the park near the palace there is a ruined chapel from 1786 built in place of the former, burnt down church. The list of historical monuments in Bałtów can be supplemented by a wooden chapel of St John the Nepomuk (19th c.) and a cemetery (19th c.) with a mausoleum of the Drucki-Lubecki princely family.