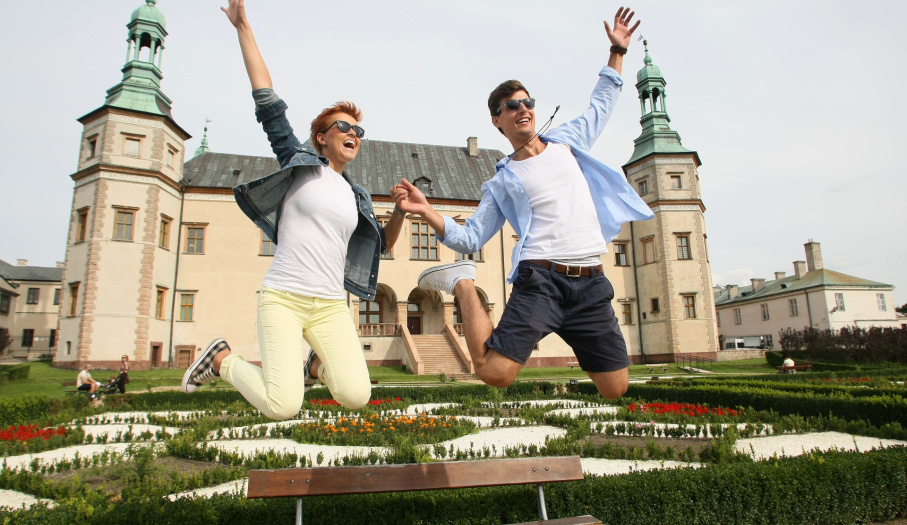 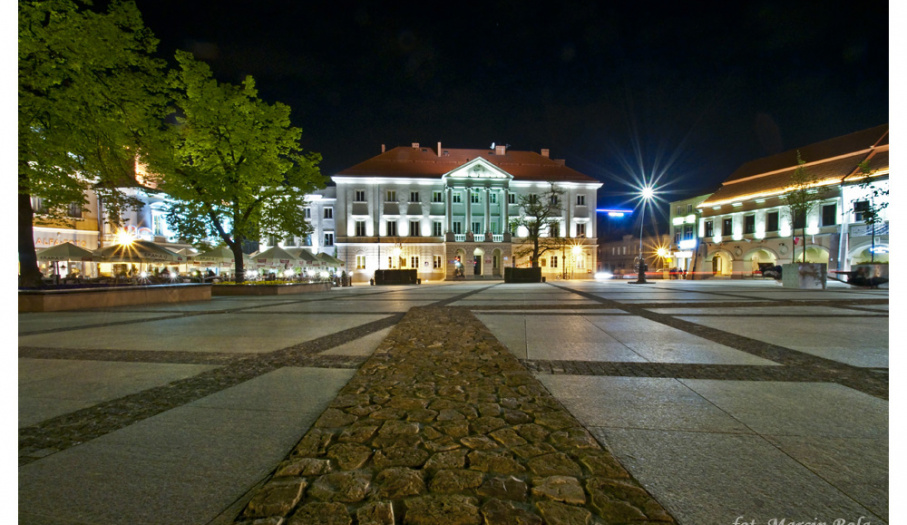 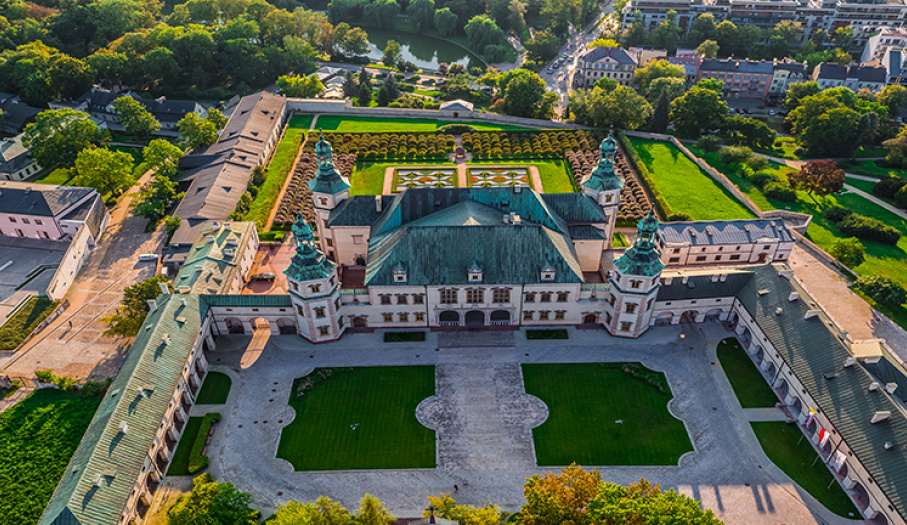 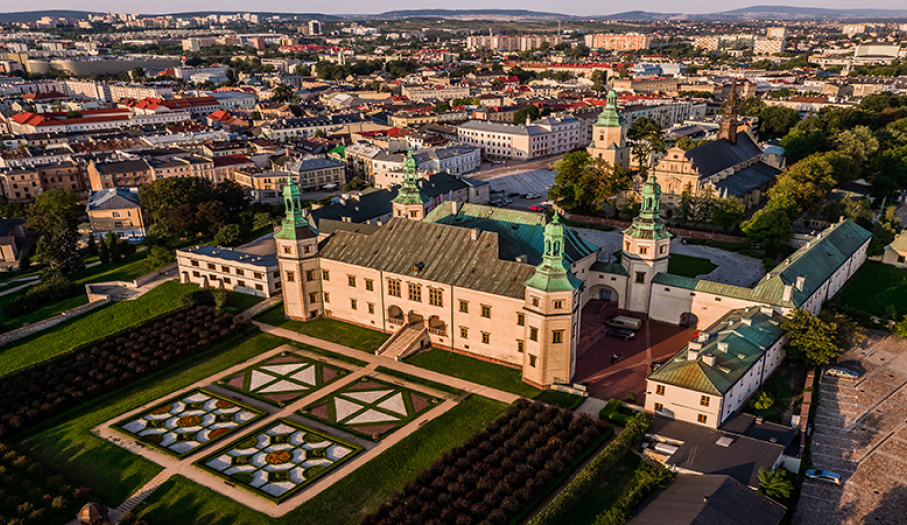 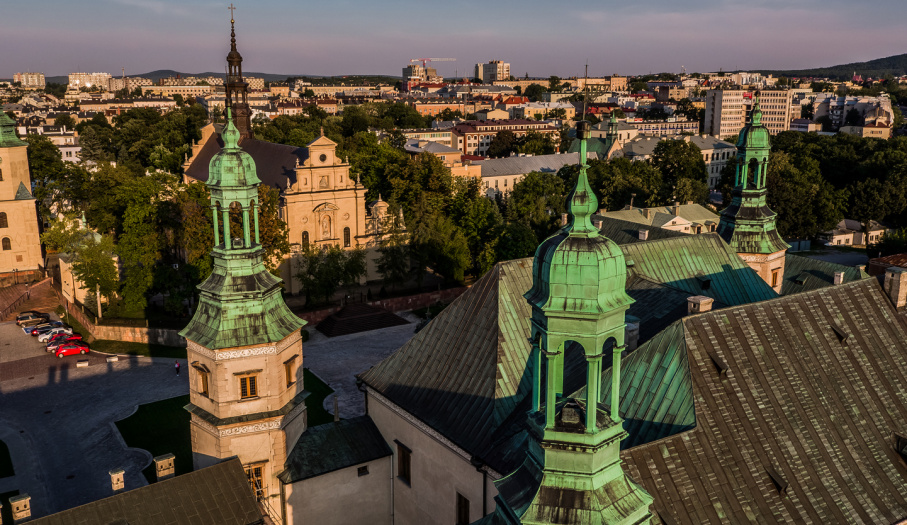 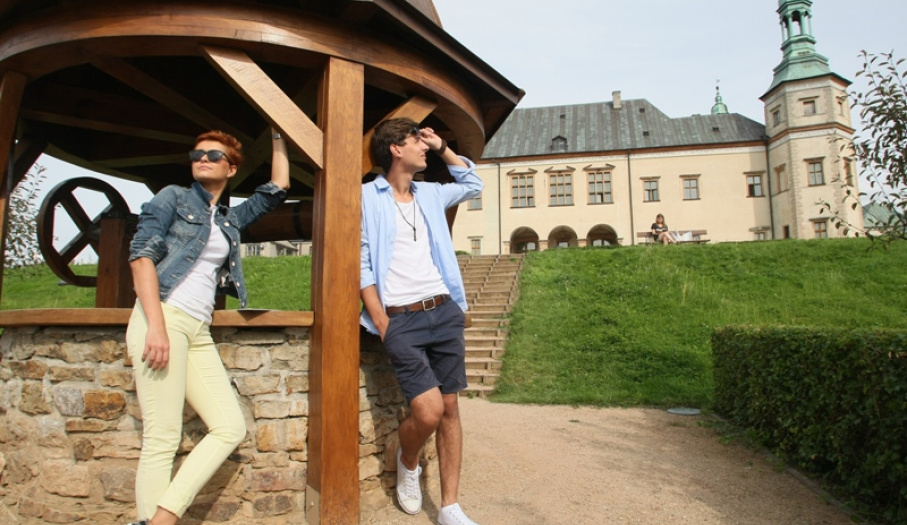 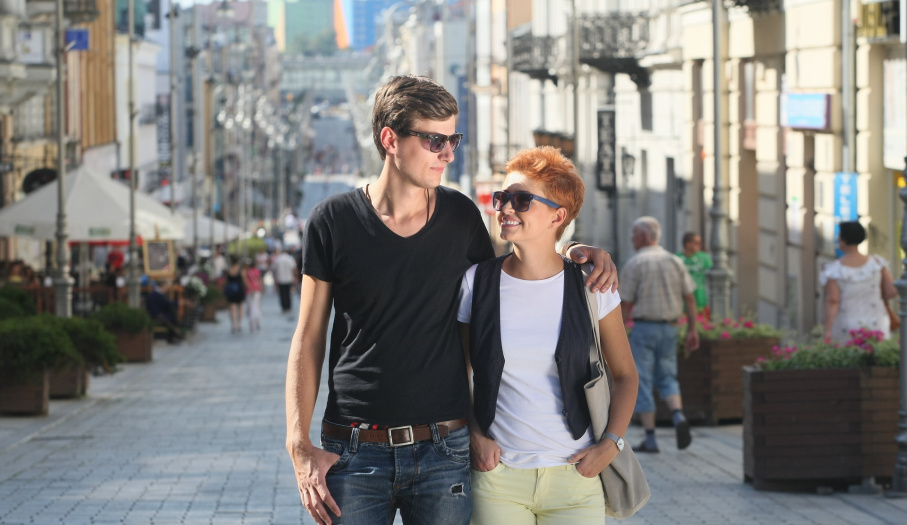 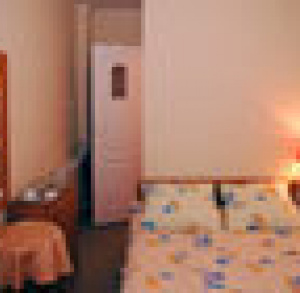 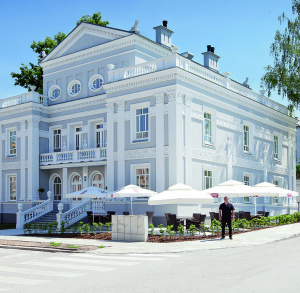 Prince Mieszko I was hunting in an enormous forest. He somehow stayed behind and found himself all alone far from his companions. Assaulted by brigands, the prince was beaten, robbed and gagged with poison. He would certainly die. Suddenly, St Adalbert appeared to him. The saint struck the nearest rock with his pastoral and a stream of water flowed out. Mieszko drank from the source and his health got restored. He also found wildboar tusks on that spot. Grateful for the rescue, prince Mieszko had a church built there and founded a settlement around it. He dedicated the church to St Adalbert and had the settlement named Kiełce (tusk = kieł in Polish). In order to commemorate the recovery of his forces, the prince gave the name Silnica to the new river (force = siła in Polish). 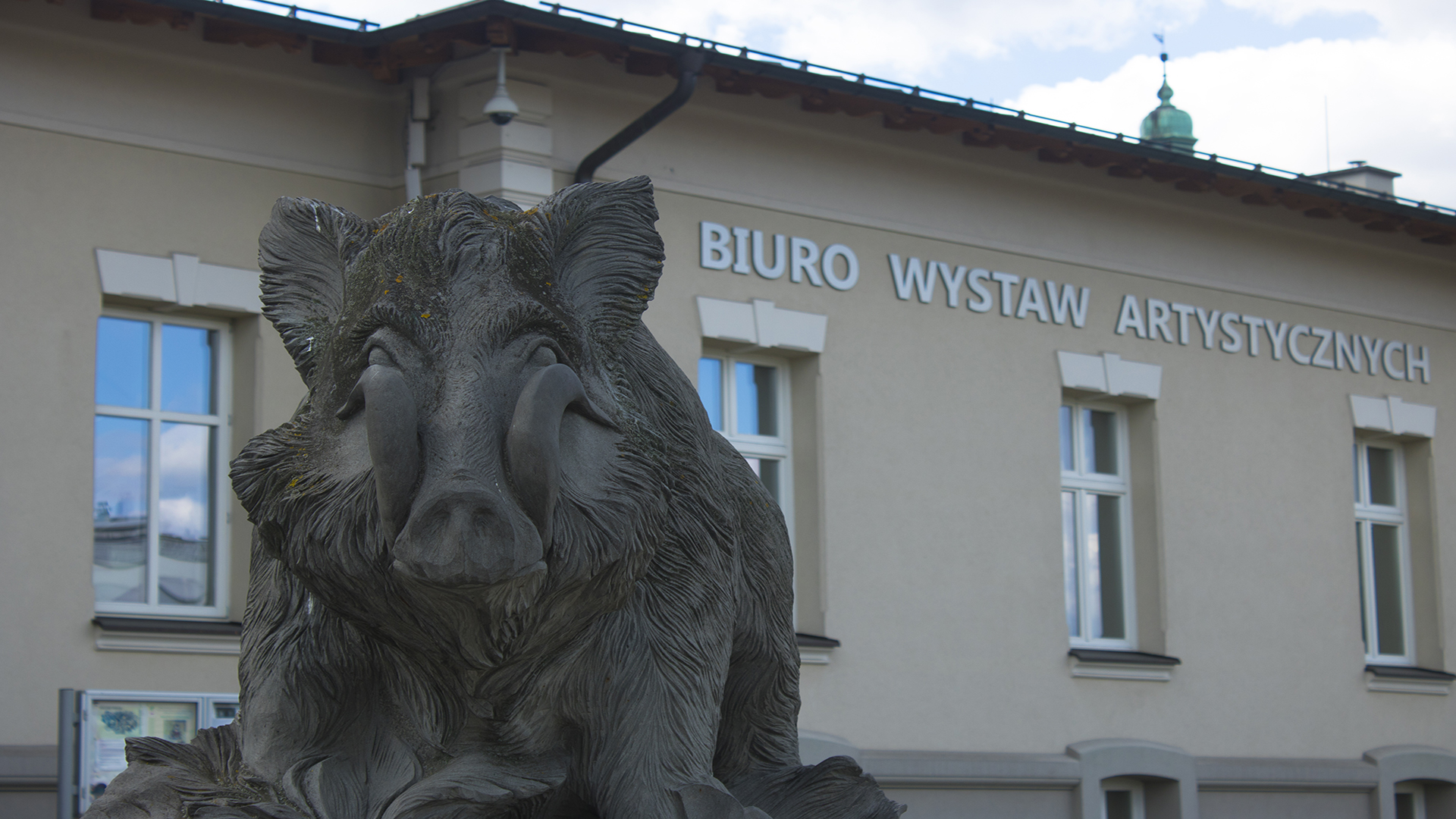 That much about the origins of Kielce says the legend, while archaeological digs confirm that there was a settlement upon River Silnica in the 11th century. The earliest records about its trading activities date back to 1084 – it"s also the date of the construction of St Adalbert"s church. At the turn of the 11th century, Kielce and the Łysa Góra estate were already in  hands of the Cracovian bishops. Kielce received its city rights in 1295, although some sources mention the year 1360 and bishop Bodzanta. The town received its crest from cardinal Fryderyk Jagiellończyk in 1493. It shows a golden crown and letters CK on a red shield.

The town rapidly develops in the subsequent centuries. Many forging workshops and ironworks are built around the town in the 14th century; their production based on the local deposits of iron ore. Crafts develop and population grows. A town hall, schools, baths and roadside inns for visitors are soon constructed. Trade fairs and huge markets are organized in Kielce a few times a year. 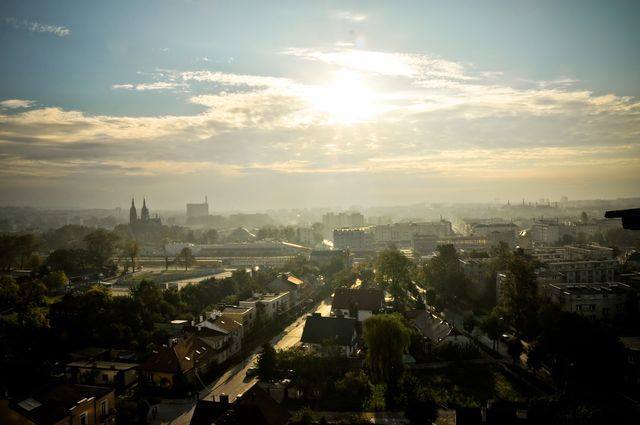 A hundred-year-long economic stagnation period came after the Swedish invasion (mid-17th c.), when the town and the region suffered important damages.

Following the decisions of the Four-Year Sejm in 1789, Kielce and all other bishops" estates were taken over by the state treasury. Pope Pius VII set up a diocese in Kielce in 1805. In 1816 Kielce became an important center of administration in the Kingdom of Poland.

At that time mining and metallurgical industry grew in importance. It was in Kielce that Stanisław Staszic established the Main Mining Directorate in 1816. Soon afterwards the Mining Academy was inaugurated. It was the first technical high school in Poland. 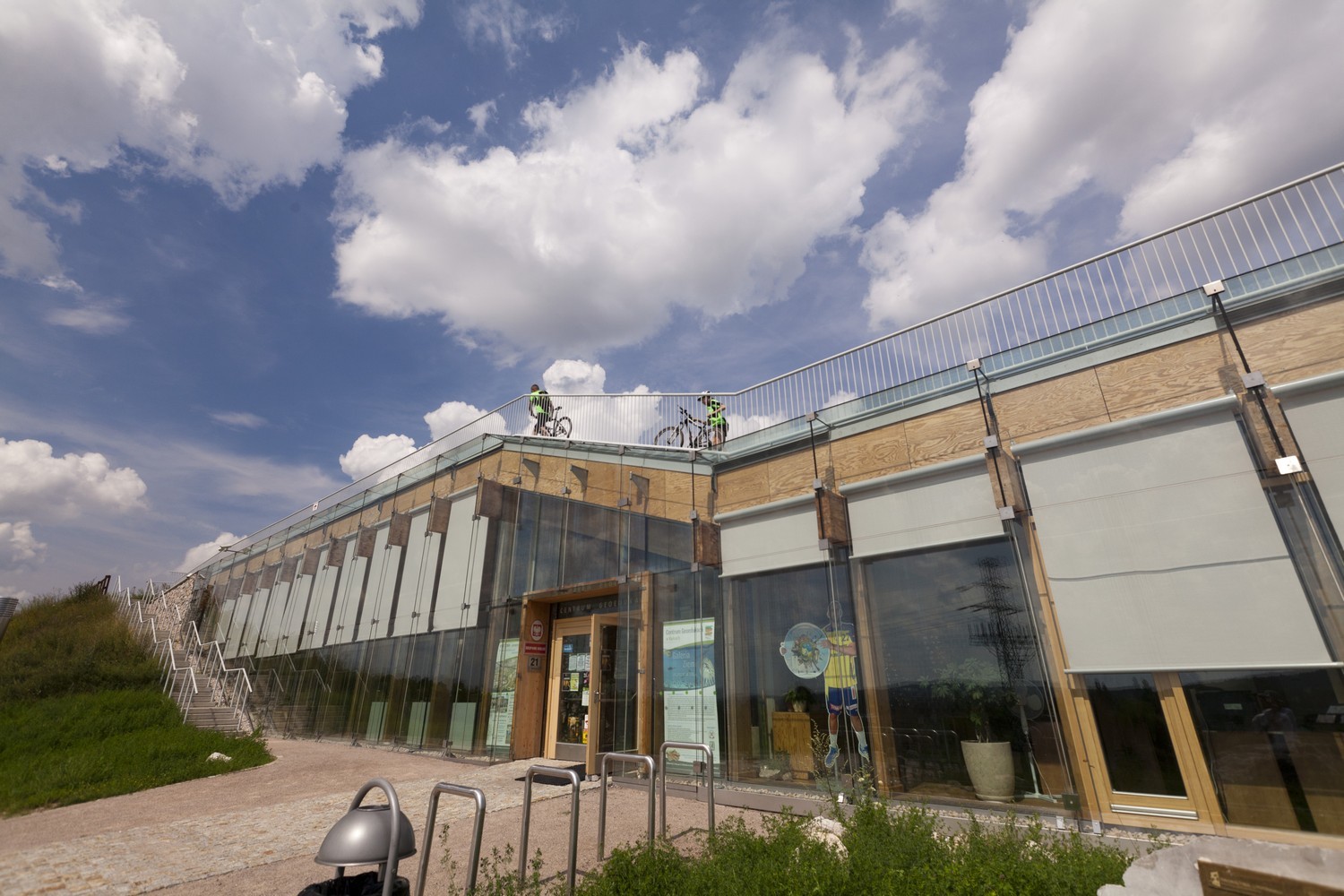 Good times returned and the city gained many new lodgings, services, paved streets, sewage facilities and  public green spaces. In 1867 Kielce became a provincial capital. New investments were made; a railway line joining Ivanogrod (today Dęblin) with the Dąbrowskie Industrial Center was opened; lime-kilns of Kadzielnia, Wietrznia and Międzygórze were put into operation.

Very important was the entry and stay of the First Cadre Company under Józef Piłsudski in August and September 1914. In the inter-war period Kielce confirmed its strong position of an important center of district administration.
World War II brought sufferings and terror to the Kielce population. Mass arrests, executions and round-ups were daily occurrences. Sixteen thousand people were kept in the Kielce prison. Twenty-five thousand Jews of the Kielce ghetto perished in the years 1940-42. Many residents of Kielce were actively engaged in fighting the Nazi occupants, most of them as members of different military resistance organizations.
The Kielce pogrom that took place on 4 July 1946 was a tragic event in the city"s history. A memorial march for reconciliation of people of good will is annually organized in order to commemorate the pogrom victims.

Palace of the Cracovian Bishops
Bishop Jakub Zadzik founded the palace in the early 17th century. Built on a square plan, the main part of this early-Baroque structure occupies the Wzgórze Zamkowe (Castle Hill). Its arcaded front is decorated with three coats-of-arms made of stone: the Korab belonging to bishop Zadzik, the Eagle of the Commonwealth from the Vasa dynasty period, and the Three Crowns of the Cracovian Chapter. Two towers topped with cupolas stand on both sides of the palace. A reconstructed Italian garden (17th-18th cc.) was open in the back-yard of the palace in 2003. Today the palace houses a branch of the national museum. Cathedral of the Ascension of the Holy Virgin Mary
The highlight of the city"s architecture, the Baroque building of the cathedral retained some Romanesque elements. It faces the Bishops" Palace and stands on the  Wzgórze Zamkowe. The first Romanesque church was erected here in 1171. Altered several times during the subsequent centuries, the church acquired its present-day shape in the 19th century. Its interiors date back to the 18th century, but the indoor murals were painted by Jan Matejko"s disciples in the 19th century. The Baroque alter (18th c.) was designed by Antoni Frąckiewicz. 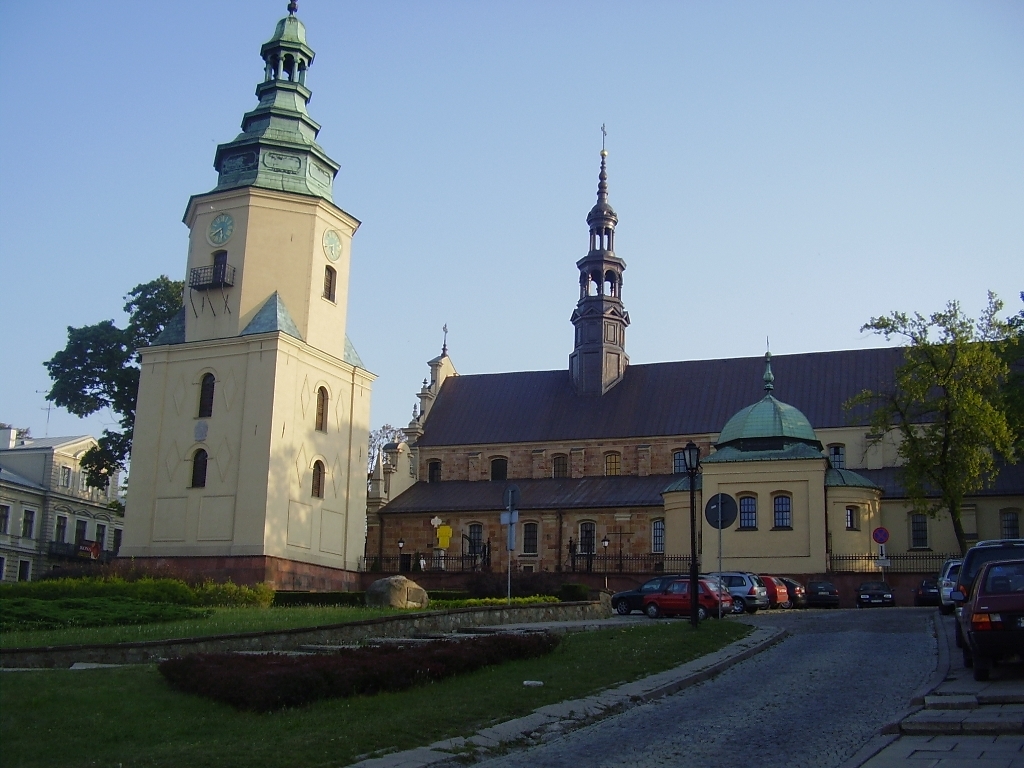 Stanisław Staszic City Park
Established in the 1830s, the Stanisław Staszic City Park is one of Poland"s oldest and most beautiful parklands; it occupies about 17 acres and is located in the very heart of the city. There is a fountain on the pond situated in its western part. The parks" well-kept green space is dotted with Baroque sculptures, stone vases brought from the monastery garden in Jędrzejów, and a few statues including those of St John of Nepomuk, leader of the Polish Enlightenment Stanisław Staszic, and writer Stefan Żeromski. 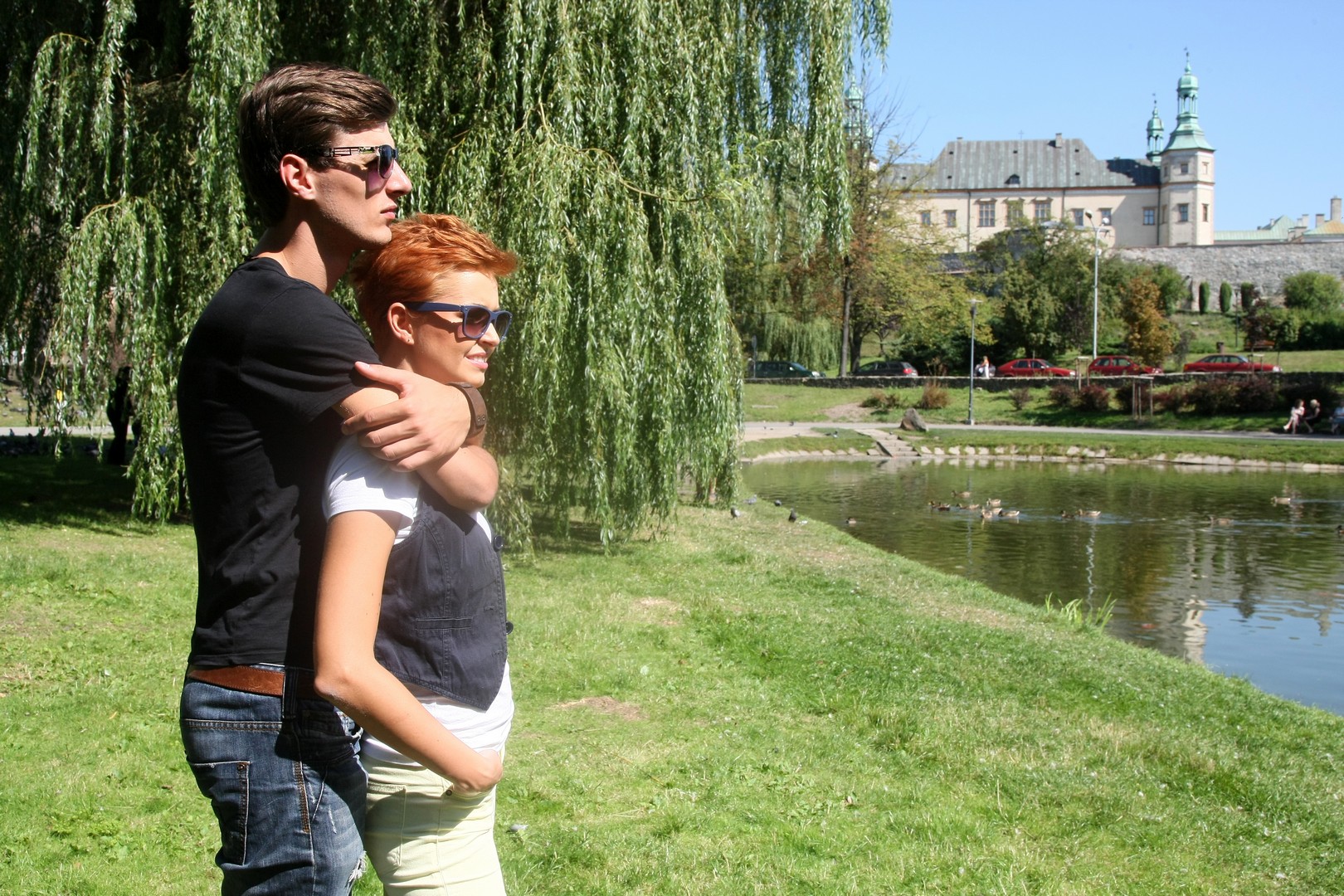 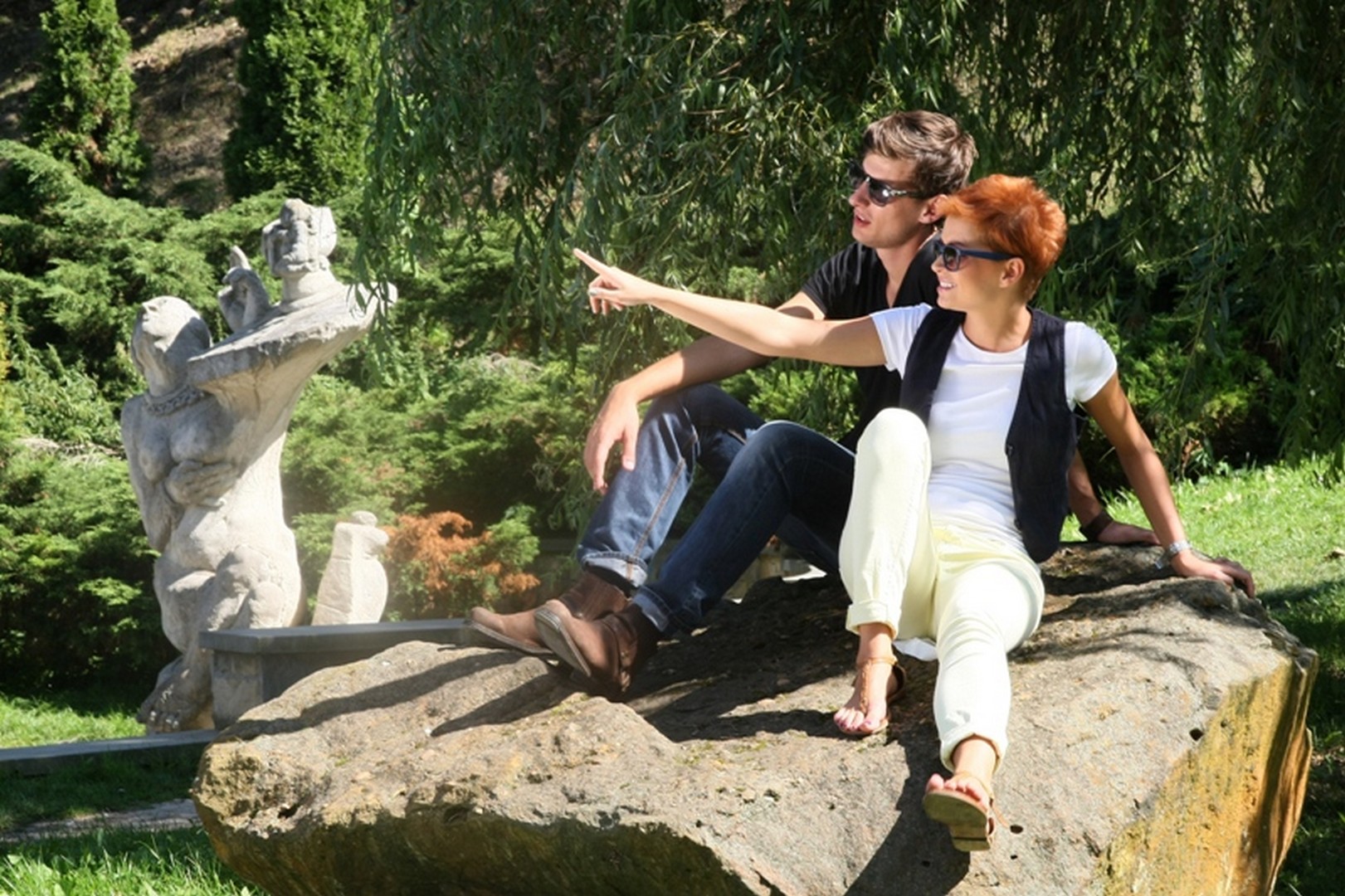 Toy & Entertainment Museum
Set up in the 1970s, it"s the biggest museum of that type in Poland. Its collection of a few thousand toys occupies an area of 700 square meters. The following are the most precious items of the collection: a German wax doll (18th c.), dolls with porcelain heads in costumes from the 19th and 20th centuries, lead soldiers (19th c.), and furnished rooms for dolls. Beside old items, there are also folk toys and modern entertainment exhibits. 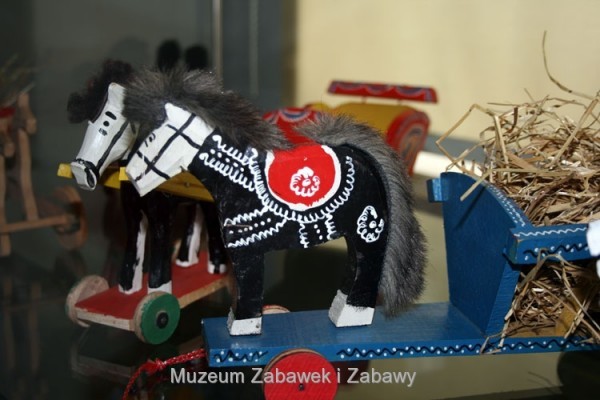 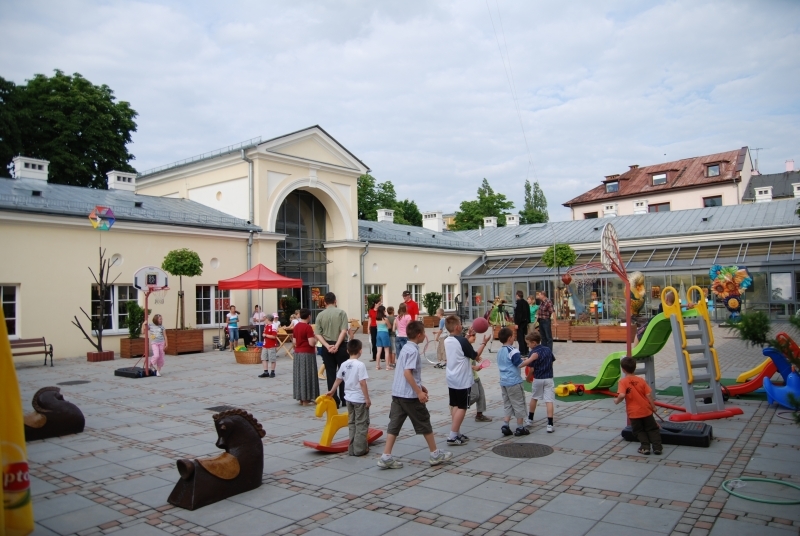 Kadzielnia Nature Reserve
This small inanimate nature reserve occupies an area of 1.5 acres and is located in the city center. In the highest section of the hill there is a rock known as the Skałka Geologów (Geologists" Rock). It stands in the middle of the former Kadzielnia quarry, closed in 1962. A few interesting geological phenomena can be observed here in the Devonian limestone deposits. They include animal remains (corals, brachiopods, fish, cephalopods), calcite ore veined mineralization, and tectonic and karst phenomena. One of Poland"s most spectacular amphitheatres was built in the southern section of the quarry. Many countrywide known concerts and festivals are organized on this stage. 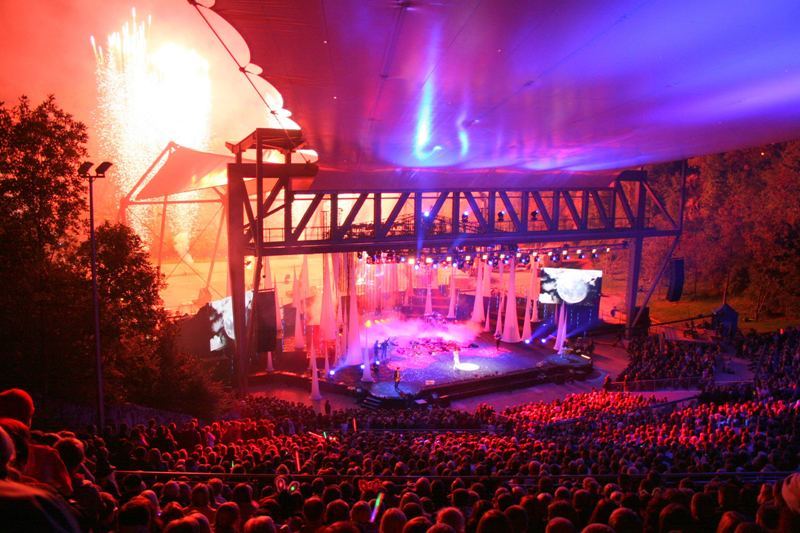 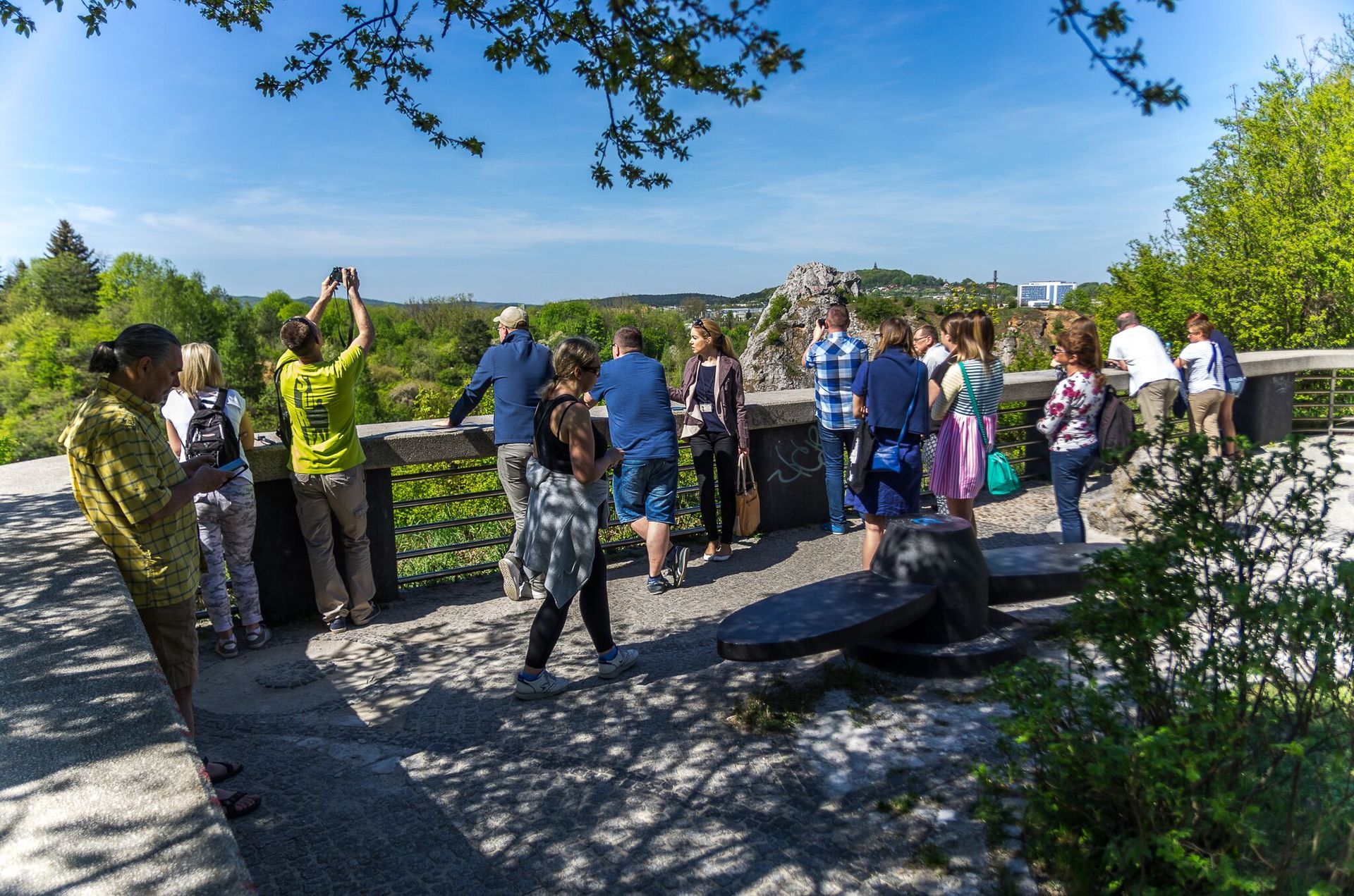