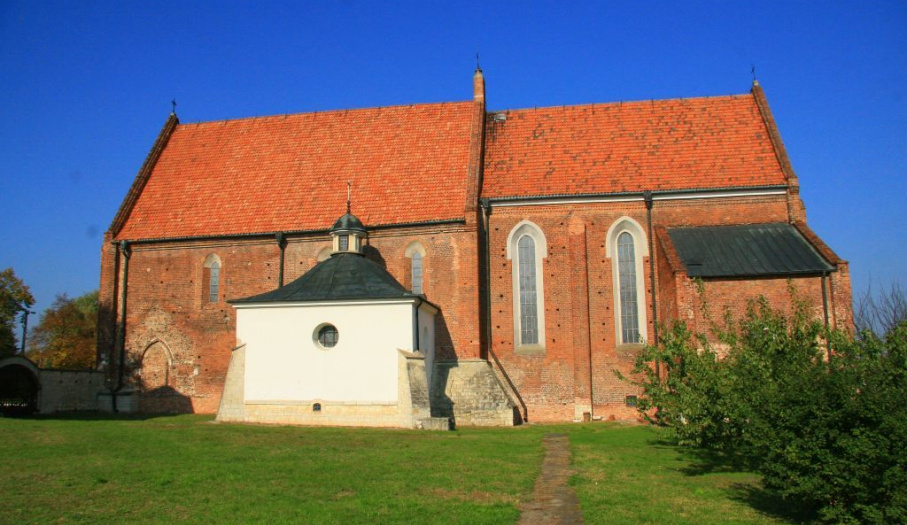 Zawichost upon the Vistula is located some 18 km north-east from Sandomierz. In the Middle Ages Zawichost was ruled by a castellan and was an important stronghold protecting the river crossing. In 1257 duke Bolesław Wstydliwy donated the town with surrounding localities to the local convent of Poor Clares founded by his sister Salome. Both the nunnery and the Church of St John the Baptist were her entrance dowry. The interiors of the early-Gothic brick church are decorated with cross-rib vaults and stellar vaults in the presbytery. Only the eastern wing of the monastic buildings survived till the present time. The Church of the Ascension of Our Lady was built on the site of the former Romanesque temple in the years 1738-1744. The archaeological digs conducted at the turn of 1992 proved that originally it was a three-nave basilica with transept closed with an apse and vaulted chapels on both sides. Romanesque fragments of the original church are still visible in the crypt. A nice, panoramic view over the Vistula enfolds from the cemetery located in the churchyard.
The Trójca is a district of Zawichost where stands the Holy Trinity Church erected most probably in the 12th century, and remodeled many times afterwards. In its late-Baroque interiors one can admire the painting of the Holy Trinity by Franciszek Smuglewicz placed in the high alter consecrated in 1798.

Informations can be obtained in The Regional Center of Tourist Information
ul. Sienkiewicza 29
25-007 Kielce
Phone: +48 41 348 00 60
E-mail:informacja@swietokrzyskie.travel