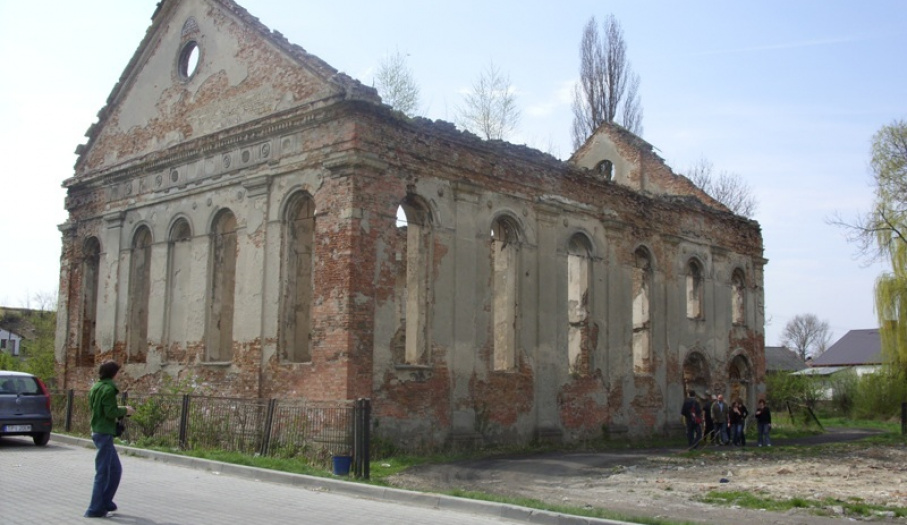 Few records of the Jewish presence in Działoszyce have survived till the present time. There are still ruins of the kahal house and of the synagogue erected in 1852, once considered the most beautiful prayer house in Poland.

There is no tombstones preserved in the former Jewish cemetery; only small boards placed on trees commemorate the former members of the Działoszyce Jewish community once buried in that cemetery.

Jews arrived to Działoszyce as early as during the reign of king Kazimierz III Wielki (14th c.). A so-called synagogue district functioned in Działoszyce and many smaller communities in the environs were its members.
The World War II put the end to the Jewish community of Dzałoszyce. The gestapo men came here from Miechów on 2 September 1942. All Działoszyce Jews (ca 10,000) were ordered to report to the town market square on the next day. Most of them were walked to the railway station and deported to the concentration camp in Płaszów near Kraków. Children, elderly people and sick persons (ca 1,500) were taken to the Jewish cemetery and mass-murdered by the Nazi troops on 3 September 1942.
--------------------------------------
The film Hiding and Seeking by Menachem Daum was granted the Grand Prix of the “Jewish Motives” Film Festival. Its story is based on real events that took place in Bronowo near Działoszyce. Three Jews found a shelter in the barn of Honorata and Wojciech Mucha one year and a half before the end of WWII. Risking their own life, the couple protected, fed and supported morally the Jewish escapees during 18 months. Their farm was once searched by the Nazis, but fortunately did not find their hiding place located under a hay stack.