Along the Świętokrzyskie Mountains 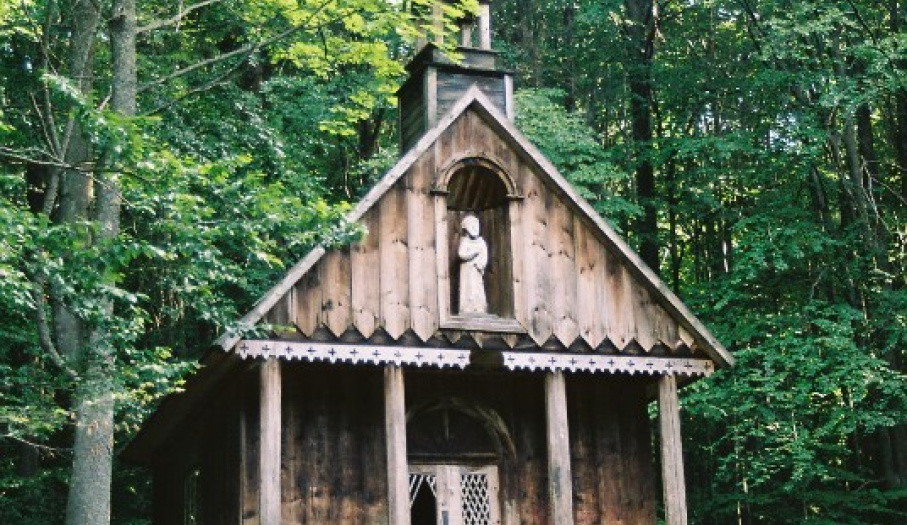 One of the most picturesquely routes of Świętokrzyskie Voivodeship, which leads through the three bands (Masłowskie, Klonowskie and partly Łysogórskie). For exact visit one needs minimum of two days. Nowa Słupia which is situated in the middle of trail, offers excellent accommodation facilities.

Cedzyna – this is one of the most favourite places for Kielce citizens and the others. The artificial reservoir transformed Cedzyna into a holiday resort. During the 18. century, the Szembek’s steel factory  was functioned here. Melting was conducted in a blast furnace, the second such facility on Polish Land. 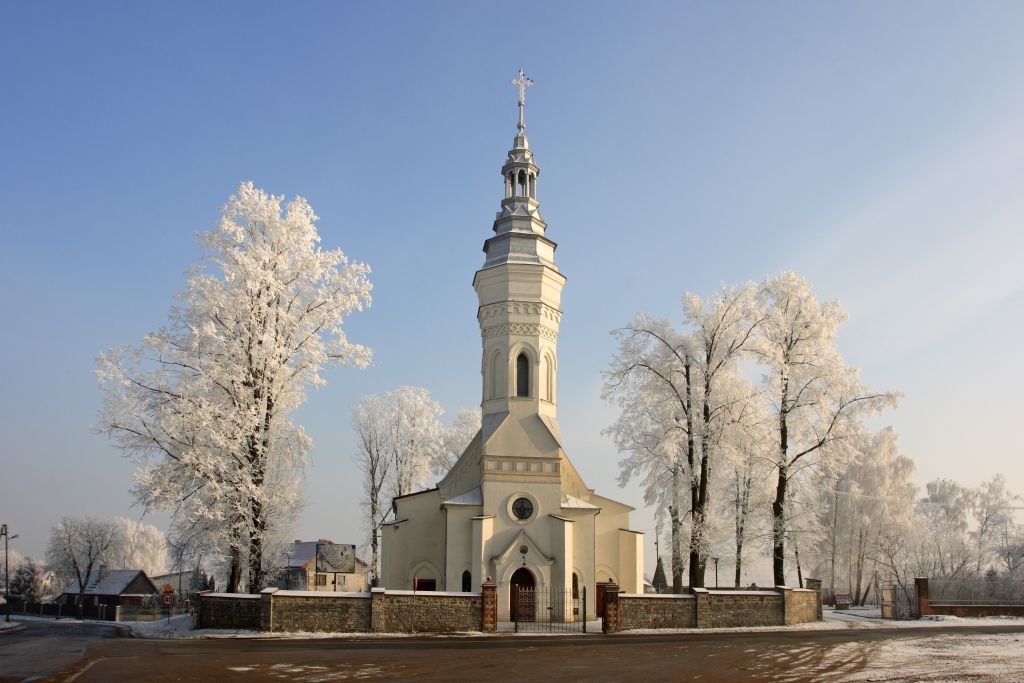 Leszczyny – worth to visit is the  Saint Jacek’s church of the bishop Piotr Tylicki foundation (1600).  The interior is fitted by Baroque crucifix, and painting of Saint Jacek in the chapel. In the porch  one can see a commemorative table dedicated to Stefan Żeromski’s parents who were buried in the local cemetery. Their tombs have not survived to this day.

Ciekoty  – is a place called "Żeromszczyzna," where Stefan Żeromski, one of the most famous writers in Poland was born. It is commemorated by a plaque made of red sandstone, "Stefan Zeromski lived there 1869-1883". “Education Centre "Glass House" has been erected here, referring to the architectural form of literary vision of Żeromski’s literature. One can spend time on Ciekoty public beach.

Święta Katarzyna  -  one should visit the Bernardine convent and Private Gallery of Minerals and Fossils – inevitable tourist point for lovers of geology, but also people sensitive to the beauty of inanimate nature. Tourists can count on professional knowledge and information guides in the museum. Through the village runs the Edmund Massalski red tail from Kuźniaki to Gołoszyce. On the trail, which leads to Łysica, the highest mountain of Świętokrzyskie Mountains, there is a brick chapel of the 18th century, where Stefan Żeromski signed his name. Beside the chapel  graves insurgent of 1863 and partisan of Second World War are located. According to many legends, the spring of Saint Franciszek has medical properties.

Bodzentyn - the little town of Bodzentyn came into being through the urban settlement translocation from the nearby Tarczek by the Cracovian (Kraków) bishop Jan Bodzanta between 1348 and 1355.  One of the most important monument in Bodzentyn is castle. The origins of the castle in Bodzentyn date back to the 14th century, when the Cracovian 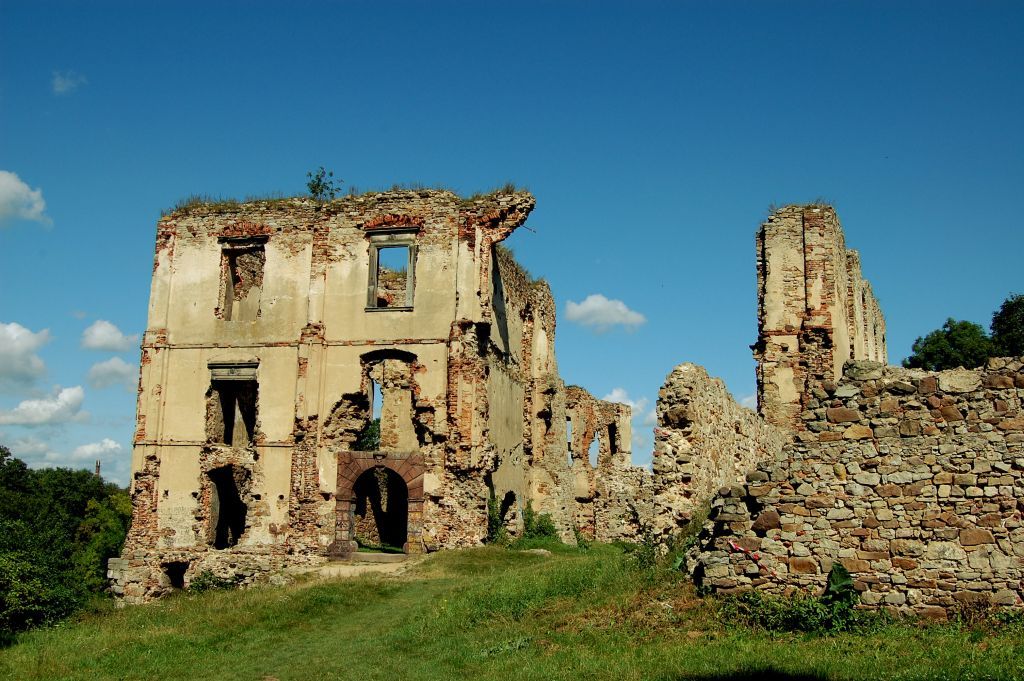 bishop Jan Bodzanta had a wooden manor built upon River Psarka. This was replaced by a brick castle with moat commissioned by another Cracovian bishop Florian of Mokrsko, and was connected to the town fortifications. Worth to see is an example of specific architecture prevailing in little rural towns is a well-preserved farm of the Czernikiewicz family in 3 Maja Street.   The mid-17th century the former wooden church was replaced by a brick building of the Church of the Holy Spirit. It functioned as a hospital church till June 1917, when a huge part of the town together with the church were destroyed by fire. The other monument is the Gothic Collegiate Church of St Stanislaus the Bishop was erected in the years 1440-152, founded by cardinal Zbigniew Oleśnicki.

Tarczek - in the Middle Ages Tarczek was the property of the Bishops of Cracow and an important trade fair settlement. One can see 13th - century Romanesque church dedicated Saint Idzi,  founded by Władysław Herman. One of the most beautiful is late-Gothic portal and Renaissance triptych (approximately 1540r.), the presentation of the Resurrected Christ in the center. The walls are decorated with late Renaissance polychrome remnants. Next to the church 19th century timber belfry is situated as well as monuments: 300-year-old linden trees and 200-year-old poplar.

Świętomarz – the name of the village derived from goddess Marzanna worshiped by Salvias. Świętomarz is famous for its outdoor dymarka position of 231 b. Ch. In addition, there is a gothic church of the Assumption of Holy Virgin Mary from 1367 - 1434, rebuilt in the twentieth century. Romanesque baptistery as well as timber belfry are worth to see.

Nowa Słupia - the area of the present Nowa Słupia was visited already in the 2nd c. BC. by pilgrims aimed to head for the summit of Bald Mountain or merchants interested in buying iron. The monks from Holy Cross founded a town of Nowa Słupia in 1351. The new town obtained many privileges from king Władysław Jagiełło. It based its economy on services rendered pirgrims. Dedicated to St Lawrence, the oldest parish church in Nowa Słupia was erected in 1678. Lateral naves and sacristy were added after World War II. Its interios contain barrel vaults with late-Renaissance stucco works and Baroque side alters (18th) with paintings featuring Our Lady with the Infant and St Anna – Mother of the Holy Virgin. 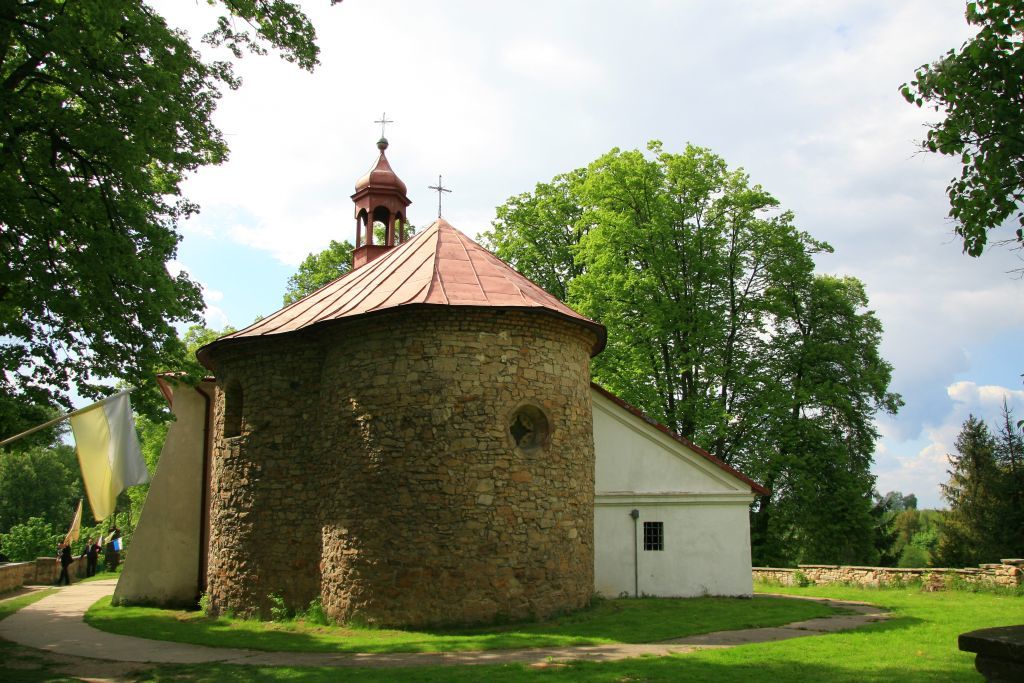 Grzegorzewice - in the village is the church, which consists of two parts: old - Romanesque stone rotunda and the nave from 1624. The oldest part is characteristic of defensive style typical of churches built in the 11th and 12th century walls were built. Over meter thick walls, with small high-placed windows, show a clear, typical Romanesque architecture.  The original equipment preserved temple carved in sandstone with the characteristics of Romanesque baptistery. From authentic hole 1627 after rebuilding. preserved today in the southern part of the rotunda is only one small, round large volumes of Romanesque art, with an interesting four-leaves clearance inside.

Mirogonowice – in the top a hill above water reservoirs was a wooden manor house of the eighteenth century. Log construction, timbered, bleached and cellars, was dismantled in 2007 by a private owner. In its place is a new mansion, but unfortunately not in the form of the original object.

Nagorzyce – manor house where on the roof can be seen risalits. After Second World War, the building has been functioned as a primary school.  In the nearby church one should pay attention to signs that commemorate the activities of Domestic Army.

Janowice – the village is famous for Jan Piwnik “Ponury” guerilla. In his family house a room dedicated to his memory was created. One can see here mementos, guerilla’s objects of everyday use, and things connected with the transfer of the ashes of the commander from Wileńszczyzna to Wąchock. 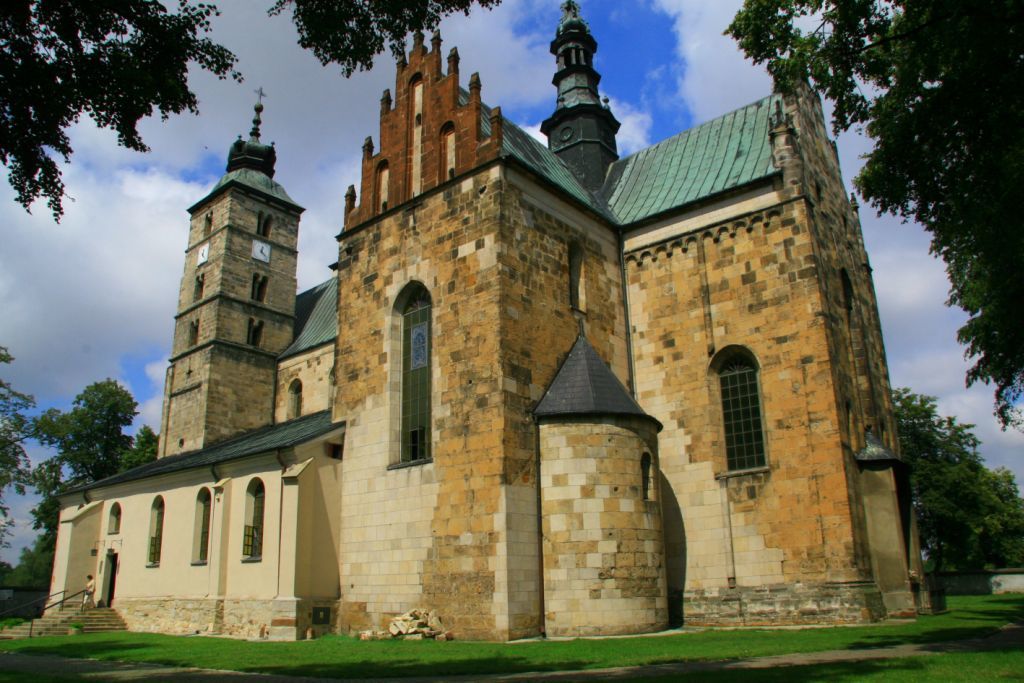 monastery. Its name was Żmigród. In 1237, the Silesian prince Henryk Brodaty (Henry the Bearded) gave Opatów together with the neighboring villages to the Lebus (present-day Lubusz) bishop. In 1282, the rapidly developing community received its location privilege based on the German law from King Leszek Czarny. Burghers felt safe behind the town walls and merchants as well as craftsmen were coming in great numbers, some of them to stay for good. Worth to see are Warsaw Gate, St Martin the Bishop"s Parish Church- One of the most spectacular examples of Romanesque architecture in Poland, Bernardine Monastery and Church and Underground Tourist Route.