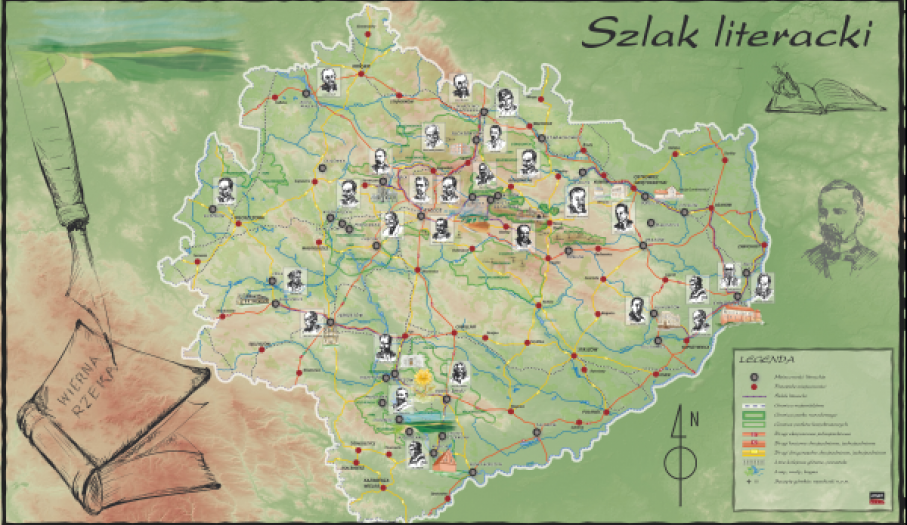 There are many ways of touring and visiting the Świętokrzyskie voivodeship. One of the most comfortable and quickest is traveling by car. For those who choose this mode of touring, we have prepared the Świętokrzyski Literary Trail divided into three loops: Ponidziańska, Sandomiersko-Ostrowicka and Kielecka. While visiting sights along this route, you will get acquainted with life and works of many Polish poets and writers. Such eminent men of letters as Żeromski, Henryk Sienkiewicz, Mikołaj Rej, Witold Gombrowicz, Jan Długosz, and  Wincenty Kadłubek await impatiently to meet tourists and lovers of Polish literature at the same time. Charming palaces and manors house museums presenting their biographies and mementos. Numerous memorials commemorate traces of their stays in the Świętokrzyski region. In order to make your touring and visiting easy and pleasant, many brown road signs were posted along the three trails supplemented with description boards located on sites.

Both Leopold Staff and Włodzimierz Sedlak established important ties with the city of Skarżysko-Kamienna.

After World War II, Leopold Staff often spent his holidays in Skarżysko-Kamienna hosted by a befriended priest Antoni Boratyński. They met for the first time in 1944, when the poet was deported from the capital during the Warsaw Uprising. He died in  Skarżysko-Kamienna on 32 May 1957, but was buried in the Powązki Cemetery in Warsaw. In the parish of St Joseph, there is an Open-Air Memory Site with Leopold Staff bust and information boards.
Priest and professor Włodzimierz Sedlak was a well-known preacher, theologian, and philosopher as well as an author of books and scientific dissertations. He lived in Skarżysko-Kamienna for many years. A memory room devoted to Włodzimierz Sedlak in located in the Municipal and Communal Public Library (ul. Towarowa 20).

The name of Henryk Sienkiewicz is often associated with Oblęgorek. On the occasion of the 25th anniversary of his literary work, the Poles living in the country and outside its borders wanted to show him their appreciation. They organized a fund-raising campaign and bought for him a palace with an estate (666 acres) in Oblęgorek. Till August 1914, the writer frequently stayed there, especially in summer time. That"s where he wrote some of his best works, for example, In Desert and Wilderness. In the well-preserved original interiors of the palace, the Henryk Sienkiewicz Museum was opened in 1958.

Strawczyn (Stefan Żeromski)
A great Polish man of letters Stefan Żeromski was born in Strawczyn on 14 October 1864. His birth is duly recorded in the public register kept in the local church. The documents shows the 1st of November as his birth day because the parents wanted to postpone his military service for one year at least. Unfortunately, the Żeromski family house is not there any more.

Stefan Żeromski spent in Kielce his youth. He attended the State Gymnasium for Boys in the years 1874-86. The experiences of the years spent at school are often used by the writer in his works. Żeromski was not a good student; he finished the school, but never passed the graduation exams. The same gymnasium was attended by other well-known Polish men of letters: Adolf Dygasiński, Walery Przyborowski, Bolesław Prus, and Gustaw Herling-Grudziński.On the occasion of his 100thanniversary celebrated in 1964, the Museum of Stefan Żeromski School Years was opened. Its collections include a reconstruction of a sitting-room in the Ciekoty manor house, the Żeromski family residence, as well as school benches, a wooden satchel, complete student"s gear, copies of school documents, and a full set of the first publication of all his works.

Edmund Niziurski was born in Kielce in 1925. His literary works are predominantly designated for children and youth. He attended schools in Kielce before and after World War II. Niziurski often placed the plots of his works in his native region of Kielce (Świętokrzyskie Mountains, Święta Katarzyna, Ciekoty, and others).

In the village of Leszczyny stands a late-Renaissance church of St Hyacinth. Its presbytery contains an epitaph devoted to the parents of Stefan Żeromski. They were buried in the local cemetery, but their graves cannot be identified.

Ciekoty (Stefan Żeromski)
In this village used to stand a manor house rented by the parents of Stefan Żeromski. The village is picturesquely located in the Wilkowska Valley and at the foot of Mt Radostowa. Here the writer spent his childhood and youth between the years 1869-83. The manor is gone, and the site together with the pond is used for recreation purposes.

Święta Katarzyna (Stefan Żeromski)
Stefan Żeromski scribbled his signature in 1882 on the wall of a brick chapel (18thc.) standing by the tourist trail leading up to Mt Łysica. Nearby is a statue of the writer and a legendary spring of St Francis. There are also two graves close to the chapel, one of them belongs to an insurgent of the national uprising in 1863-64. Stefan Żeromski described his death in the novel entitled Syzyfowe prace.

Bieliny (Józef Ozga-Michalski)
The house in which Józef Ozga-Michalski was born in 1919 does not exists any more. Majority of his poems, novels and articles are reflecting the life of the region. In many of his works, Józef Ozga-Michalski used the regional dialect. He did much for his native village: had new bells brought to the parish church, founded an outpatient clinic, and advanced the construction of the electric system. In the 1940s, the writer had a new house built in Bieliny. It was a hip roof structure covered with shingle,  made of larch and fir-tree wood. Its design was most probably imitating a hunter"s lodge. The Godki Świętokrzyskie (regional tales) is his best-known work.

Mikołaj Rej, who became the owner of Nagłowice in 1545, was a successful landlord and managed his property very well. He built apiaries and afforested the land. He is the author of the following words well-known to all his compatriots:"Let it by all and sundry foreign nations be known that Poles are no geese — they have a language of their own." A memory room of the famous poet and prose writer is located in a manor hose built in 1800 in place of the original Rej"s property. It presents his life story, works and ties with Nagłowice. The present manor is surrounded by an English-style park in which grow very old and big oak-trees remembering the poet"s times. There is a tourist information center in the manor, which also offers overnight accommodations.

Jędrzejów (Blessed Wincenty Kadłubek)
It"s believed that Wincenty Kadłubek was born around 1160 in the village of Karwów near Opatów or in the village of Kargów near Stopnica. For unknown reasons, he gave up his post as the head of the Cracovian (Kraków) bishopric and entered the Cistercian monastery of Jędrzejów in 1217. The author of the Polish Chronicle died and was buried there. His grave was opened in 1633; his remains were put into a silver coffin and eventually placed on the alter of a specially built side chapel. Polish royalties as well as many eminent Poles were coming to pray by the relics of Wincenty Kadłubek who was blessed by the church in 1764.

There is a biographic exhibition devoted to Adolf Dygasiński in the Regional Museum. A great lover of his native region Ponidzie, Adolf Dygasiński was born and spent his childhood in the village of Niegosławice near Pińczów. He went to school in Pińczów, and later in his life stayed in the town quite often. His family sitting-room and his father"s office were recreated in the museum rooms; manuscripts of his literary works, private letters, postcards and photographs are also displayed. A statue of Adolf Dygasiński stands in front of the museum building.

Busko-Zdrój (Wojciech Belon)
The Belon family came to live in Busko-Zdrój in 1965. That was the time when Wojtek Belon attended the local school and started to write poetry and music. While in gymnasium, Wojtek founded a band called Wolna Grupa Bukowina and took part in the 4th Stock-Exchange of Tourist Songs in Szklarska Poręba in 1971. His song Ponidzie won one of the main prizes. That was also the beginning of his artistic career. A bas-relief and a commemorative plaque devoted to the artist are placed in the Wojciech Belon Culture Center in Busko-Zdrój. The

Jan Długosz, Wieniawa coat-of-arms, is known as the first Polish historian. He was ordained in 1436, and became a canon of Kraków (Cracow); later on Jan Długosz was also a canon of Sandomierz, Kielce, Wiślica and Gniezno. He was a tutor of royal sons and was often sent on diplomatic missions abroad. Jan Długosz founded a house for canons and vicars (1460) as well as a four-storied belfry (1460-70) in Wiślica. Now the Długosz House is occupied by the Regional Museum. Jan of Wiślica, born ca. 1485, is an author of the first Polish epic written in Latin and entitled Bellum Prutenum (Prussian War). The text was an apotheosis of the Jagiellon royal dynasty.

Doły Biskupie (Witold Gombrowicz)
Witold Gombrowicz"s grand-father founded here a company manufacturing products of stone-masonry. His father limited the stonework production in order to build a carton factory. In 1911, he and his wife founded the Witulin Joint Stock Company wishing to provide their son with financial security. The development of their business was halted by the war operations.

Dwikozy (Wiesław Myśliwski)
One of Polish best contemporary prose writers Wiesław Myśliwski was born here and spent his childhood in the house belonging to his grand-father Jan Gałęzia. The recollections of this period are often found in his works such as Kamień na kamieniuor Widnokrąg. His parents are buried in the local cemetery.

Just as in Wiślica, Jan Długosz founded a house for missionaries in Sandomierz in 1476. The building is divided into two parts by an end-to-end vestibule. The residential part is on the left, while the right section is designated for reception purposes. Now the house is occupied by the Diocesan Museum. A foundation plate with the Wieniawa coat-of-arms of the founder is placed over the southern portal. Diocesan Museum – Jan Długosz House
ul. Długosza 9, 27-600 Sandomierz
tel. 15 833 26 70
www.domdlugosza.sandomierz.org
Open: April-Oct, Tue-Sat 9am-4pm, Sundays and holidays1:30pm-4pm;
Nov-March, Tue-Sat 9:30am-3pm, Sundays and holidays1:30pm-3pm;

Jarosław Iwaszkiewicz
The poet and writer Jarosław Iwaszkiewicz was very fond of the medieval city of Sandomierz. He rented a flat here in 1936 and tried to spend some time in it each year. He not only worked in Sandomierz but also wrote about the city in such works as Lato w Nohant, Wycieczka do Sandomierza, and poems in the album entitled Sandomierz. Until recently there functioned a museum of literature in the house (ul. Katedralna) that the grateful town authorities let the author for use. At present the exhibition Ciemne ścieżki devoted to the poet is kept in the Regional Museum located in the Sandomierz castle.

The founder of Polish futurism Bruno Jasieński was born in Klimontów in 1901. He left Klimontów when he was 7 years old and later visited the town only from time to time. The family lived in the former Lubomirski house, now the seat of the Cooperative Bank. Little is known about His works created in Klimontów. It"s believed that these were the poems published in the collection But w butonierce, a drama Znawca kobiet, and a short story Klucze. The Brunonaliafestival of futurist art is organized in Klimontów every year on the occasion of his birthday, and it lasts a few days.